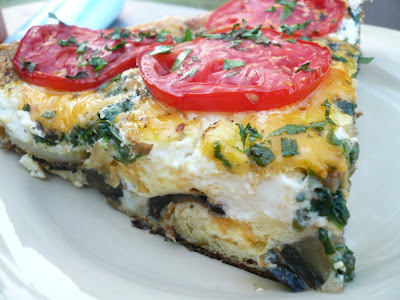 Pretty huh? Delicious too!
Frittata is just a fun thing to say and I had found that this word had been bouncing around in my head lately as I have been coming across some really great recipes for frittata's using spring veggies. I am not really getting spring veggies so I was really looking for something different. I grabbed my "Homegrown Pure and Simple: Great Healthy Food from Garden to Table

)" by Michel Nischan and started searching.

I came up with the recipe for a Garden Vegetable Frittata and as luck would have it I had a couple of eggplants sitting on my counter just begging to be used (um-starting to rot) so this would work out perfect.

Now the only problem was that I would be at the skating rink from 5 PM until 7:30 PM. How the h*** was I going to get this made. Not too much of it could be done ahead which is what I usually do. T. to the rescue. I left him the recipe and instructions and he followed through wonderfully. You see he is not really one to ever cook from a recipe and I personally think that they tend to stress him out a little but he did this for me and I was so glad he did. This meal was great. I had made a salad earlier in the day and some dressing so we had that while the frittata was resting. My youngest one ate a PB & J and went to bed (skating nights tucker her out!) but my oldest one loved it. She is the one who doesn't like tomatoes hence the frittata with only one half with tomatoes! 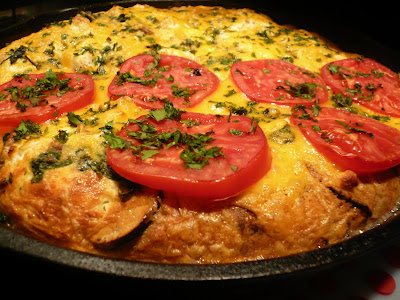 See how nice and fluffy this was?

I truly love frittata. They are the perfect, deceptively easy (yet always impressive!) dish. My boss' hens are laying again, I should snag some eggs while they're fresh!

Oh, this reminds me of how long it's been since I made frittata... It's asparagus season... I think I know what's for dinner tonight!!!

Hi Heather I would give my right arm for some fresh eggs to use in a frittata or anything else for that matter!

Hi Kittie - I love anything with asparagus! Hope you enjoyed dinner!

Gorgeous! I can tell this was delicious!!

Num. Frittata = Favorite in our household!