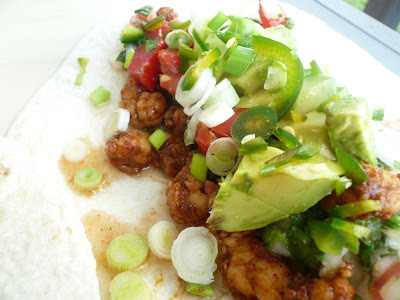 Shrimp Taco's with homemade Pico de Gallo, chopped scallions, jalapeños, and avocado!
We are so lucky to be living here in Florida. I get a ton of fresh, locally grown produce (during the winter) and also a ton of fresh, locally caught seafood. During the winter, when I was going to the Worden Farm Farmer's Market, I was standing in line to pay and I heard some one ask if the "shrimp guys" were there. The response was "yes" so I decided to follow the askers and see where they were going. Down the side street and towards the water we went and there was a small shrimp boat that had coolers on the back (would be way to creepy for me to take pictures of this boat and the people that work on it don't ya think? Maybe next time hehehe.) Apparently you just tell the guys what size you want and head on or off.

Well, I got very good at this and we ate shrimp at least once a week, that is until the market ended in April. Before it all ended I got their phone number and on Thursday of last week I called them. They were there and had a load of shrimp. So I headed my car to Punta Gorda to buy some shrimp. I asked them for 1 lb. mediums, head off and 1 lb. large head ons. I wasn't really sure what I was going to do with them but I knew I wanted them. So I paid my $12 and off I went...Yep you read that right $12 FOR 2 VERY GENEROUS LBS. OF FRESH BOAT SHRIMP!!!! Pretty cool huh? 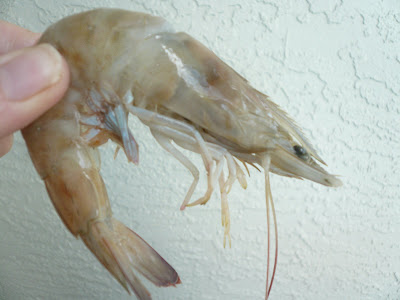 See the large size...I really like the beheaded first but you can't have everything (or so everyone keeps telling me!!!).

Thursday night for dinner we just made some pasta and cooked the shrimp in some toasted garlic, shallots and butter. Lots of butter and tossed this with the pasta and loaded on some fresh Parmesan and had a nice easy dinner! 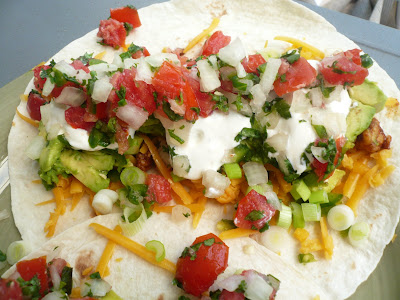 Last night we decided to make shrimp tacos out of them. I made some Pico de Gallo. and popped the heads off the shrimp cleaned them and chopped them up, cooked them in some taco seasoning and added my topping of choice. Great easy dinner for the end of another crazy, busy week!!!

I like it with the head. More Flavah!Your so lucky and Im craving those tacos now.

How I envy that fresh seafood and year round produce. We live in the landlocked, wintry Midwest so shrimp, fresh veggies is either days (if not weeks) old when it gets to us or $$$$$.

This looks wonderful. I really envy your ability to get shrimp that fresh, and with the heads on to boot!

Don't be shy...suck the juices out of the head!

I remember being on the coast in Steveston and buying shrimp from the boats. No such luck inland, but we seem to get a good variety nonetheless perfect for tacos:D

Those are tasty looking tacos! I really like shrimp tacos.

Thanks Glamah-I am not a big fan of the head on bit...shrimp just look odd to me!

Hey Francie-these are good and real cheap. We are pretty lucky!

Hey fearless kitchen- we are very lucky to get hem at all!

Hi Val-Something about getting them right from the boat and the fishermen that makes them so much better!

Hi Kevin-these one turned out really well! T. thinks it'a all about the toppings anyway!

Great tacos - and I'm jealous of your fresh shrimp!

It doesn't get much fresher than that - looks delicious!