Not your normal pasta dish! 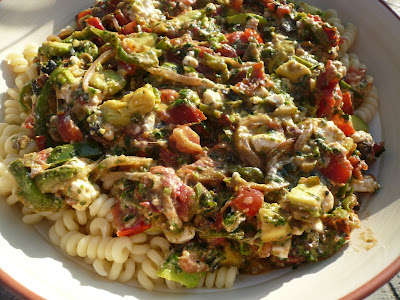 The pictures didn't turn out real well (just imagine how happy everyone is seeing me run off with their dinner again!) and it looks real heavy but it isn't. That is all herbs, vegetables and a small bit of feta mixed in. I guess I should have tossed it first!

We were trying to pigeon hole the pasta dish that we had last night and there was no way we could do it. It has some Mexican, Italian, and Greek flavors but none of them were the predominant feature of the dish. When I first looked that the recipe I was pretty skeptical and I really don't use a recipe for past dishes, but I thought this one sounded pretty interesting and it was full of fresh ingredients so I knew it had to be good. Also a major plus was that I didn't have to go out and buy anything. I had it all on hand!

I found the recipe in Simply Organic: A Cookbook for Sustainable, Seasonal, and Local Ingredients

by Jesse Ziff Cool. This is a great cookbook for anyone who is interested in eating around the seasons.

Of course I added and changed around some things based on what I wanted to get rid of in my fridge.

1 lb of fresh fettuccine (we used a good quality Fusilli)
1/4 cup extra virgin olive oil
1 small red onion, thinly sliced
1/2 red bell pepper, thinly sliced (I used 1/2 a green pepper)
2 lg garlic cloves, minced (we used 4-what can I say-we like garlic!)
1/2 shallot, finely chopped (not called for but we had it on hand)
1 jalapeño chili, seeded and minced
1 lg portabello mushroom, diced (not called for but I had it and wanted to get rid of it!)
1/4 cup tequila (they say it's optional, I say it's a must)
2 lg tomatoes, seeded and chopped
1/2 cup chopped fresh cilantro
2 Tbsp chopped fresh oregano
4 ounces feta cheese, crumbled
1 avocado, halved, pitted, peeled and chopped
Salt
Fresh ground black pepper

Posted by Judy@nofearentertaining at 11:51 AM

Judy, the photo's fine and the ingredients read well. This is one those recipes that crosses alot of cultures...I like to call them United Nations dishes!

I like whats going on here. All the flavors work and look appetizing.

I love that sproingy pasta covered in herby, savory veggies. A huge plate of pasta is the ultimate comfort food.

Hey Heather - It was surprisingly light especially in comparison to most pasta dishes!