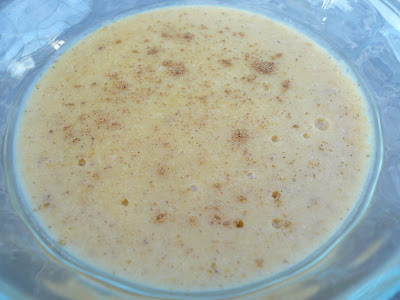 Pumpkin Pie Pudding!
I've made the cheesecake, the traditional pie, the bread, cookies and cupcakes. This, though, was something different. As soon as I saw I knew I had to have it. Susan of Food Blogga was the source.

Now she did all sorts of fancy stuff with it like added some incredible looking candied pecans and some freshly whipped cream. Did I bother with all of that...um, nope I ran out of time. But it was still so delicious. I will be making it again, and again, and again! 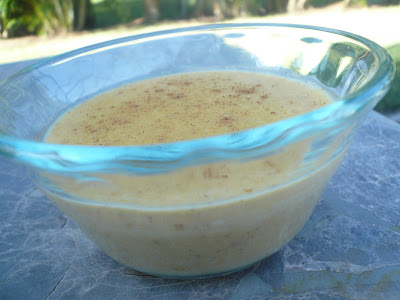 Combine sugar and cornstarch in a medium pot over medium heat. Add 1 cup of milk, whisking until the sugar and cornstarch are dissolved. Add the second cup of milk and salt, and bring to a simmer, stirring frequently. Lower the heat, cooking pudding for 10 minutes, stirring frequently. Remove pudding from heat for 2-3 minutes. Lightly whisk one egg with vanilla extract; slowly add to the pudding, whisking constantly. (Removing it from the heat will prevent the egg from cooking). Stir in the pumpkin and pumpkin spice. Simmer for 2-3 minutes, or until thick, stirring several times. Remove from heat and place in serving dishes.

Before you make the candied pecans, lay a piece of tin foil coated with cooking spray on the counter. Also coat your utensil with cooking spray so the sugar won't stick to it. In a medium non-stick skillet over medium heat, add the pecan halves. Sprinkle sugar and salt evenly over them. As the sugar begins to melt and coat the pecans, quickly stir them until evenly coated and lightly toasted, about 1-2 minutes. Remove from heat and slide nuts onto the tin foil, including any sugar drippings. (Avoid browning the nuts as the sugar will taste burnt.) Let cool and harden, then chop into small pieces.

Before you begin to make the whipped cream, consider these helpful tips: Start with a deep stainless steel bowl that has been chilled in the freezer for about 15-20 minutes. Chill the beaters of the electric mixer as well. Both will help to create more volume in the cream. Once ready beat ½ cup heavy whipping cream on medium-high speed until soft peaks form. Sprinkle the sugar evenly over the whipped cream and beat until peaks re-form. Whipped cream can be covered with Saran Wrap and refrigerated for 1-2 hours.

Thanks for this delicious alternative to all of the other pumpkin recipes out there!!!

***I also wanted to let everyone know (brag about it...) that I was featured on a really cool site yesterday as a featured blogger on The Food Channel. Check it out!

I saw this over on Susans blog as well. I'll add it to my things to do list. I still have a can of pumpkin left over:D

I love pumpkin - this is a great time of year because it's all over the food blogs! I want to make pumpkin muffins or bread - perfect for a fall breakfast, but this sounds great too!

This sounds really pleasant. Something to savor slowly...I bought 3 tiny pumpkins and am looking around for something creative since I've been around the pumpkin block, too. YUM. Now, if it would actually feel like Fall weatherwise, that would be great, huh?

This looks so tasty. I don't like using boxed pudding mixes anymore and I love finding new recipes for pudding, especially with pumpkin. Thanks!

Hey Val- You'll be happy you tried it!

Hi Maris-This one was really good. I was thinking bread and muffins too but this caught my eye and it was really simple!

Hey Kelly-some nice fall weather would have gone well with this!

Hi Lori-You'll like this and it was so easy!

I haven't had pudding in forever (but man did I ever grow up on the stuff! Chocolate pudding with chocolate chips = happy Michael) and this sounds like a fun and delicious way to return to this dessert

This looks like a rice pudding from over here.

I would try this but sub the full-fat milk to throw off all you soy milk luvahs.

Holy Sweet Jeebus! I need this! Like, right now.

Congrats on being featured! I am about a week late getting over there - do you have a link to the page where they featured you????

This pudding does look GREAT!