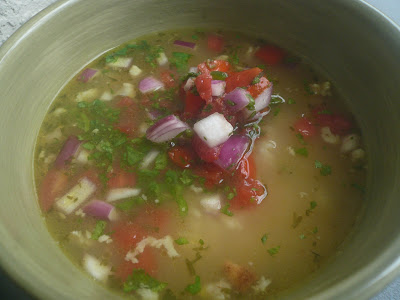 I was trying to figure out what to do for dinner and I found 2 chicken carcasses frozen and just waiting to be made into soup. It's still pretty hot here and I never want a heavy soup so I decided to make my Mexican Style Chicken Soup. It is just a light chicken broth soup with some chicken added to it.

I put the frozen chicken bones in a pot and added some onion, garlic, and fresh cilantro and let it simmer away all day. Just before dinner I strained the bones from the soup added the chopped up chicken and cooked some rice. I had made pico de gallo earlier so a nice simple dinner was born!

This is so incredibly simple and can be simmered all day in your Crockpot if needed. The trick to this is to freeze your bones from the roast chicken that you had. When you are ready for a nice pot of chicken soup you have the bones all ready to go!

Update on T's Dad: He had his eye surgery on Monday. They are still waiting for the results of the culture taken. The only thing is nothing is growing yet so they are starting to wonder if it was a blood clot???? He has been coughing up some blood to top everything else off and they had to biopsy his heart valves for the staph and fungus. Still nothing conclusive except for MRSA! We are well into his second week in the hospital...I think we should have more answers by now!

You are the pico de gallo queen and that stock wit hthe cilantro must have perfumed the whole home.


Glad to here the T's dad is progressing.

I love light soups with chicken broth. I make a very similar one and it's great.

No sense letting that chicken carcass go to waste! There's still lots of flavor there.

We did something similar with turkey after Thanksgiving last year.

Anything with pico de gallo gets my attention!

We are having chicken soup tonight! :) How funny is that! Great minds, I suppose!

Still keeping fingers crossed for T's dad - I know, you would think there would be more info at this point...

Hey Peter-I have a major addiction to cilantro so pico is right up there on my fave list!

Hi Ivy-When it's still hot light is definitely the way to go!

Hi Nate-n-Annie-Use all parts of those high dollar, all natural, free range chickens!!!

Hi DTW-I'm with you there!

Soups are always great this time of year ... I am getting a break from the heat ... we will be in Austria for one more week then back to Florida ....

My prayers for your father-in-law ...

I am loving soups lately and this looks like one that would be a hit at our house. I am planning a "Soup Party" and trying lots of new recipes.