It Was Pizza Again! 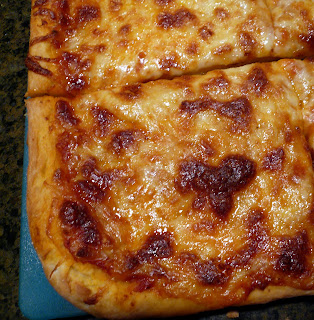 Yesterday was a very disorganized day for me! I am trying to get a ton of things done before Friday because my sister is coming to visit and I want to spend as much time with her as I can. Unfortunately I always take on way too many things and end up a little frazzled.

This week I decided that I needed to get all of my recipes from this blog put in recipe format and on my website as well as on here. Should have been easy right...no way! For some reason my links won't work. I had one of my bf's come over yesterday and she gave me an alternate way of doing it but it still irks me that it won't work the way that it should. Then last night I was going to bed and I have just changed my Internet browser over to FireFox so I decided to try viewing my new recipe page and low and behold it was a mess!!! I have one full page that is all HTML code???!!! I know that isn't how I wrote it! But when I switched it out to Explorer it looked fine. Go figure. Well, looks like I'll have plenty to do now won't I?

Anyway I had promised the girls that I would make pizza for dinner and bake them Apple Cookies. I remembered this about 5 minutes before I had to leave to meet my friend for lunch. I always make my dough in my Kitchen Aid (Shop now for the KitchenAid stand mixer that fits your unique kitchen style! The color possibilities are virtually endless!

) but this time there was no time. I pulled out my bread maker and found my recipe book that came with the thing. I plopped all of the ingredients into it and hoped for the best. I left it in the hands of the dough gods...It was to do it's thing in there for about 1 and 1/2 hours. That would give me plenty of time to go for lunch and get back and pull it out. Now when I put it in I had no idea how long it would take but when I found out it was only 1 1/2 hrs I needed to figure out what to do with it until dinner time. My idea was to pull it out of the bread machine when it was finished, punch it down and wrap it in plastic wrap and put it in the fridge, pull it out an hour before dinner and all would be good. Was not to be though...

I went into my office and started doing some stuff and then heard a strange noise coming from the kitchen so I went out there and looked around. Nothing was out of place, it was still the same mess I had left it in. Then I heard it again...from the fridge???!!! I opened the door and the dough had burst through the wrap and was oozing around in there trying to devour containers of cream cheese, sour cream etc. We crap. I brought it back out and punched it down again and put it in a big bowl covered with plastic wrap. Held onto my earlier plan and brought it out when we got home from skating and made 2 pizza's with it. One for us with sauce and one for my fussy one with only olive oil. The crust didn't puff much but was not nearly as tough as I had though it would be. It was actually very good.

Would I do this again?
Yes, but I would add more salt and some garlic and maybe some oregano. It is was faster and less work than by hand or with my Kitchen Aid mixer so I would have to say it was a winner and now that I know how long it would take I would try and do it 1 and 1/2 hr before dinner!!!

Combine all ingredients into the bread pan.
Select the dough setting. Allow dough to do it's thing and remove when it is finished.
Bake with toppings at 400 degrees until browned, hot and bubbly!

Ha ha ha! Good job - you're quite the fearless experimenter! Alas, it's Costco baked chicken and french fries from Trader Joes for us tonight.....

Yes I am experimental but only due to necessity and disorganization!