A couple of days with only sporadic internet and I thought was losing my mind!!! I think that Comcast finally has their problem fixed but it sure was annoying! I have been using the time to get organized and caught up on a bunch of other things that I have been working on so all in all it was a good thing.

My newsletter should be going out tomorrow...yes I know it is a little late but one of my friends told me that as long as it was out before November ended it was still November's newsletter!

I also just found out this morning that my recipe for the Wild Mushroom Spread came in tied for 3rd place in the "Royal Foodie Joust" at the Left Over Queen so that was pretty exciting seeing as that was the first challenge I have been involved in. Thanks so much to those of you who voted!!! 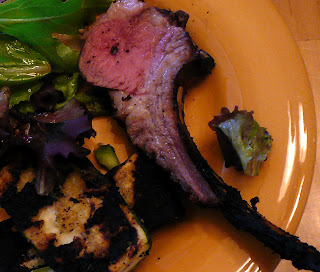 Last night for dinner we had lamb chops. Now generally I have a problem eating lamb and veal (you know...the whole cute and cuddly thing etc.) but I have come to realize that lamb is probably one of the healthiest meats for you and we have made a conscious effort to try to feed the family the healthiest options that are out their. That being said it was very good. We simply marinated the rack of lamb chops in a light marinade of soy sauce, minced garlic, oregano, rosemary, basil, salt and pepper. I know there are no measurements but with a marinade it is not critical to have everything measured out. You should start with you base being soy sauce but from there you can go heavy on what you like and lightly on what you don't.

Marinade it for about 20 minutes and cook on the grill. You want the lamb to be cooked to medium rare or an internal temperature of about 145 degrees.

We served it will grilled zucchini and a salad it was a nice quick weeknight dinner.

Tonight is pizza night again!!! Something that everyone loves and is easy and quick to make!!!