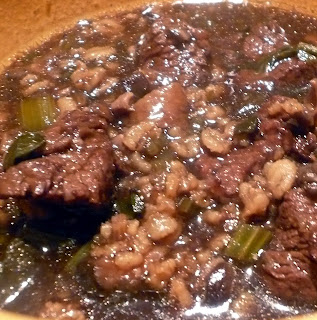 Beef and Barley Soup with Mushrooms

It has been a very busy couple of days in the Chiappini household. I have decided to move my youngest daughter from private school to public school (a thousand different reason that I will not bore you with). With this comes a whole slew of problems especially doing it in the middle of the school year and without telling her that it was going to be happening! We had to tell her on Wednesday night that her last day would be Friday and that she was starting at a new school on Monday! Nothing though could have prepared me for her reaction to the news. It took her about 2 seconds to process this information and then instantly started with the arm pumping and loud screaming "Yes, Yes, Yes...now I will get to make new friends and boyfriends!!!" She is in kindergarten????!!! Still it was so cool to not have her frightened or apprehensive at all about doing this.

I decided to so a small going away party for her at her school. She has been there since she was a baby so this has hit all of us pretty hard. But I wanted to bake a cake for her so I came home yesterday afternoon after doing all the transfer stuff and baked her a nice white cake that I was going to let her decorate. Well it ended up about the thickness of a pancake! So back to the drawing board. By this time I only had just enough time to get it in the oven beofre I had to pick them up from school. I grabbed a bod cake that I have had in the pantry for an emergency. I followed to directions: Add water, oil, eggs. Mix and pour into pan and bake. Pretty simple huh? This freaking thing was as flat as a pancake too???? For some reason I was not to have cake!!!

T. took her to Publix later that evening and got her an Island Princess cake that she insisted on having personalized with "We'll miss you"! Too funny!

Anyway seeing as I was totally brain dead and couldn't even bake a cake from a box (I am a Daring Baker for crying out loud???!!!) I did not want to tackle too much in the kitchen but I did have some stewing beef that I bought so I checked out what else I had and found some barley. I had also gotten some shitakes at the farmer's market on Wednesday so I made Beef Barley Soup with Mushrooms. Turned out really good and we ate it with left over garlic bread from Tuesday night. Big Yum! 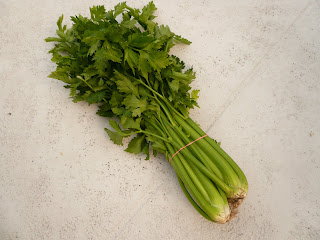 Check out this beautiful celery I got from the market!
Beef and Barley Soup with Mushrooms (adapted from Food & Wine Soups and Stews)

1. In a large pot heat the oil over medium high heat. Add the meat and brown well. Add more oil if needed. Remove the meat.

3. Return the beef to the pot. Add the water, salt and bring to a boil over medium high heat. Reduce the heat and cook barely simmering for about 30 minutes. Add the barley and the savory and cook until the barley is cooked.

This was a really nice and fast soup. We served to girls over some left over penne pasta that we had in the fridge and it was a great meal. I drank the leftover wine to help me get over not being able to bake a simple cake!!! I guess some things are just not meant to be!

This looks delicious! I bet it would freeze decently, too - something to keep on hand for when things get hectic.

Judy this post was hilarious! What is the story with the cake, man?! That is just too weird - and you a daring baker and all that! LOL!

Glad your little one is cool with the big move! :) That is a relief - she sounds like a ham!

That celery is the variety you will find in Europe...very aromatic.

I love beef barley soup, one of my favourites.

Thanks Jess-I bet it would freeze well but we didn't end up with any leftovers. DH really loves soup!

Jenn-That is funny about the cake. I guess I always bake from my heart and my hear was kind of heavy...who knows? She is a real ham and should fare well wherever and what ever she does!

Peter M-That is so funny that you told me it was aromatic. The reason I bought it was because when I was standing in line to check out I caught a whiff of someone else's and just had to have my own!

that celery is HOT. and the soup looks fantastic.

That soup looks great! The perfect thing to make with the sudden cold wave we've been having.

It might still be cool enough for that hearty soup - looks fantastic!