It was Sunday Soup Day again! 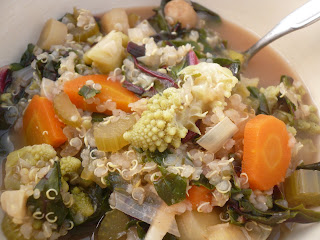 Nice, fresh, earthy tasting soup using quinoa
So I guess you can tell that we had soup again. Trust me though not 2 pots of soup I ever make turn out the same. I use the soup to help clean out all the produce from last week and make room for the new stuff on Wednesday! This week I had no bones once again so I used some organic, free range chicken stock that I bought at Costco and added to it some onion tops that I had leftover and saved, a turnip, some carrots (yellow and orange), garlic and an inion. I put the soup on about 10 and then we headed out for the day. On our way home I thought we would stop at Ada's (like a Whole Foods) and pick up some chicken for the soup. So we bought some chicken and some other stuff but I was really excited because in the bulk room they had organic quinoa. I bought a couple of cups of it.

When we walked in the soup was smelling good. We decided not to use the chicken but to just add about 3/4 cup of quinoa to the soup. I also had some red chard and romanesco to get rid of so it all went in the pot to cook right down. T. had made some "Creamed Leeks with Smoked Gouda" (I will post this recipe tomorrow) yesterday that he wanted to eat with the soup and some bread we had bought. so we decided that that was enough. 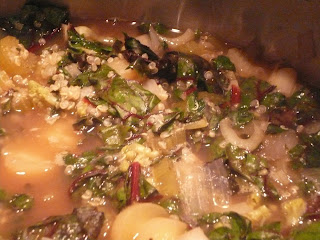 This soup turned out really good. I had never had quinoa before but have heard so many excellent things about and now that I have tasted it I will try and use it more!

I love quinoa! It is good for so many things! A nice hearty soup is a great use of it!

Judy, you are amazing! That soup looks sooo good.
I haven't heard of quinoa. I learn a lot of new ingredients here.
Can't wait to see what you come up with next.(at Tybee Island we used to stay at the Ocean Plaza, but I found some great off season deals on the condo's on the side where the light house is. great deals.Huge 2 bedrooms,2full baths,kitchen and 2 patios facing the ocean for less that motel rates)

Oh yum. You are so darn creative with your soups. I would never think of adding the things you do. And they all turn out looking SO delicious. Of course...no meat = no husband eating it. I have such a die-hard meateater, it makes 'lightening up' a bit difficult at times. I can't wait to see the recipe for the leak and gouda soup - I adore gouda!

You should make a soup cookbook, Judy! You have so many great ideas.

the soup looks good to me! something that I would try!

ga.farmgirl-when we go to Tybee we rent houses. I love the Mermaid houses. We travel with the dogs so they have been pretty accommodating!

Hey Danni-Honestly I am just cleaning out my fridge when I make these soups. I guess I just have good leftovers. I could never even repeat them!

Heather - Um, yeah, that could happen in my spare time!!! Thanks for the boost though!

Hey Big Boys Oven-It was really good. I think this one was really helped by the quinoa!