Quick dinner on a crazy night... 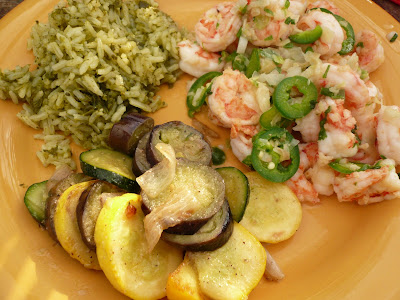 ***(Ignore the funny type and boxes - blogger seems to have a mind of it's own today!!!)

My meals are starting to develop a bit of a pattern I am finding. I can never remember what I had planned to make so I end up winging it at the last minute. Thank goodness. Because some of the things I have been turning out have been pretty good! It guess it doesn't hurt when you have a fridge full of fresh produce that needs to be used up before it goes bad????

Last night was another of those nights. I had bought some poblano peppers so that I could make "Arroz Verde con Poblanos" from Ramblings of a Frantic Cook. I also knew that I wanted to cook up the fresh boat shrimp that I had bought the other day at the market and roast some of the zucchini and summer squash. How could I pull this altogether so I didn't have such a mishmashed meal????

Well, Franice's rice was what I tied it all together. That rice was delicious. There is not much of a recipe to it but what it turns into is light and wonderfully fresh tasting (all about fresh tasting right now!). I sauteed up the shrimp and at the last minute decided to throw in some fresh jalapeños, sliced up real fine and added near the end. In the meantime I sauteed up some zucchini, summer squash, onion, garlic and eggplant in some olive oil.


In a blender mix the peppers, chicken stock and cilantro. In a small pan cook the onion in the olive oil. When the onion is cooked add the chicken stock, pepper and cilantro and heat to a boil. Add the rice. Allow to simmer covered for 20-25 minutes. (Francie has some great pictures on her blog so go check them out!)

This was a great, fresh tasting meal and when I looked at my plate on the table I realized what I had done. Almost every single thing on my plate had been grown locally , but for the rice, and the shrimp is a sustainable resource caught by small time, local fishermen!

Posted by Judy@nofearentertaining at 1:08 PM

That sounds really good Judy! Sounds like my life - just throwing lost of veggies together and coming up with fun new dishes!

This dish is so colourful, balanced in flavour and healthy.

So glad to hear you loved the rice. It's one of our faves!

Who says meals have to be contrived and fussy to be delicious..sometimes simple says so much more....besides it just fun to wing it:D

Hey! The rice looks fabulous! I really like the idea of blending the peppers and cilantro together for the rice. Makes for deeper flavor and awesome color, I'd imagine!