How I get my kids to eat what I eat 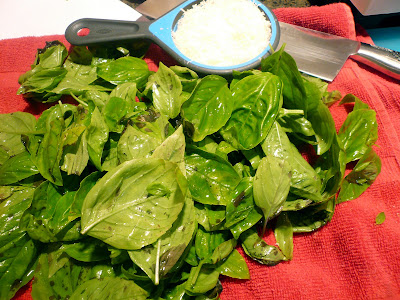 Last night's dinner was pretty boring. T. had a meeting at 5:00 and my oldest daughter has been suffering really horribly from a very long attack of hives so none of us were really in the mood for a huge meal. I decided that I would boil up some pasta as they could have theirs with some butter and Parmesan and T. and I could dip into the Basil Pesto that I had frozen from a month or so ago. I also made a huge fresh salad. The girls had the pasta and then some salad.

Seeing as it was a slow food night I thought I would let you in on my secret for getting my kids to eat what we eat. Really it is no huge secret. I do not in any way, shape or form believe in this new revolution to "hide" healthy food in my children's meals. I believe that children need to learn how to eat properly and make the right food choices. By hiding the food I think you are doing them a huge disservice as they are not being taught anything about how to make the healthy food choices.

My children are given a plate of food. Not a huge plate but a small amount of everything that we are eating for dinner that night. They can then taste everything and eat what they really like. An example of this is maybe we would be having some grilled chicken thighs. Along with this we would have some green beans sauteed with shitake mushrooms, grilled radicchio and oven roasted beets. They will get some of all of this on their plates. They don't like beets but they know that they have to eat a half of a small quarter. They like the beans but not the mushrooms so they will eat the beans but skip the mushrooms. They will each eat some of the radicchio each with their favorite dips (youngest daughter likes balsamic and blue cheese and oldest daughter will eat just blue cheese). They will need to eat the better part of their chicken. When they sit down for a meal they know that this is what is expected of them. After they have eaten they then get to have a "snack" or dessert. Usually I have something homemade for them like cookies or cake. I figure after the healthy stuff they have chosen to eat they can then choose a dessert!

I do respect their major dislikes. My oldest has never liked tomatoes. Anything with tomatoes she gets a pass on. Generally we can make it relatively easy without and if it is a red sauce or something she just doesn't put it on.

I know this sounds like I am "making" and "forcing" them to eat things they don't like but it has been proven over and over that it generally takes about 10 tastes of something before people can really decide if they like it or not!

I guess what I am saying is that I believe in empowering my children with the ability to make the decision as to what is healthy or not. Yes, I guide them strongly but I also make sure that thy have plenty of sweets (cakes, cookies, muffins, pudding etc.) so they are not deprived anything.

On another note my friend Jenn-The Leftover Queen has just done a really interesting post comparing the cost of Farmer's Market produce and Grocery Store produce. Very cool post. Just as interesting though are the comments that she has gotten! I really believe that feeding my family from the local U-Pick and Farmer's Market saves my family an incredible amount of money each week. I will post more on this later this week.

I am filing this away for when my boys decide they want to eat at the table with me:) I think it is a great concept!

Whatever works for your family Judy is a good one. I know lots of kids who eat bok choy, beets, asparagus...my daughter loved goat cheese and spinach. I also love the concept of The Great Big Veggie Challenge as well.
http://greatbigvegchallenge.blogspot.com/ with Charlotte & Freddie.

Hi Brittany-I would love to eat a meal alone so maybe you shouldn't rush the dining together thing!

Val-I love that site! This is what I love about blogging. You have access to everybody else's resources~

This is pretty much what my friend is doing with her son, and it's been a great success. I haven't seen anything that the kid won't try, and he likes almost everything as a result.

I love this Judy! I really do - this is exactly to the T the way I plan on feeding my kids (when I have them) I have 2 soon to be stepdaughters. Granted when I met them they were 10 and 12, so a lot of their taste buds had been geared to certain foods and their mom raised them on not the healthiest foods.

But the youngest she just loves my cooking. When we lived in New England, they were with us every other weekend and I fed them the kinds of foods I post in my blog. The youngest one always cleaned her plate, I mean always. However the older one used to fight with Roberto about "where is the white bread???, Before Jenn moved in, we had white bread! I hate all these whole grains!" LOL!

But I really believe that kids evolve to eat as adults, what they are fed as kids. That is why I want to introduce them to EVERYTHING. All kinds of foods, cuisines, etc - expand their minds.

here's my take on the whole picky palate thing - kids up until 70 years ago were raised on vegetables and grains and all of that - these new foods that cause all sorts of health problems are NEW. I think genetically every human knows what is better for them.

Anyway, I am getting carried away, but I know I am in like company. Thanks for the shout out about my post!

Hey Jenn- I really think that this will be the future for all of our food. More people are getting interested in this everyday!

Just a side note...we also made all of the girls baby food. We froze it ahead of time so we always had some when we needed it. Never bought a single jar of baby food. Kinds proud of that fact! They ate that for a while then they just started eating what we were having but ground up and liquid added to it!

I don't have kids yet, but this is definitely good to know. They better be eating what I'm eating, lol!