A Meal That Went So Very Wrong!!! 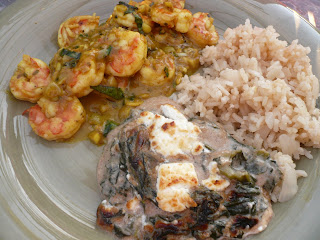 Curried Shrimp, Biryani, and Spinach with Fresh Cheese and Yogurt!

I had a ton of errands to run yesterday so I spent most of the morning doing that. When I got home I started to panic because I couldn't for the life of me remember what I had planned to make for dinner. I am not the most organized person around so I can't do an actual food plan but I usually have a pretty good idea of what I was going to make. Yesterday though I was baffled and it made me so mad because I had already planned it all out. The only thing that I could remember was a dish with spinach and yogurt from Mark Bittman's-How to Cook Everything Vegetarian. 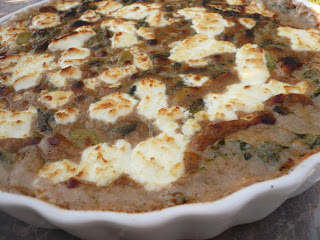 Spinach with Fresh Cheese and Yogurt

I placed this in a tart pan and dabbed goat cheese on it so that T. could pull it out and heat it up later for dinner.

Then I left to pick up the girls, still thinking about what to make with the spinach, yogurt thing. Got home with the girls and decided to make some Indian rice to go with this dish. Here is where it gets ugly...I don't like Indian food. I have never liked Indian food but everyone around me loves it so I thought that maybe it was just a residual kid thing like "eww it smells I don't want to try it"!!! I grew up in Toronto. We have one of the largest Indian and Pakistani populations outside if India and Pakistan! I am very familiar with the food and the smells. I don;t like it!!!! So I have no idea what would possess me to think that I should make it???????

I decided to make Biryani from the same book as above:

I also stuck this in the fridge for T. to heat up later.

This is where it got so bad I wanted to throw it in the trash. My whole house stunk. Now I know to most people this is a nice smell. I don't like it. I tried but the smell was making me not feel well. When T. got home I was almost in tears! I had spent the majority of the afternoon making a meal that I did not want to look at let alone eat. He walked in and immediately loved the smells. I guess we had decided to eat the shrimp from the Farmer's Market the day before. So now he wanted them to be curried.

I left to go to Karate with my oldest daughter and loved the smell of the fresh air, my car, the fresh cut lawn down the street, dog poop right beside my car, anything but my house!!! And now he was making curried shrimp to go with it. I wanted Mexican Food, I wanted a hamburger, I wanted anything but what I had made!!!! How sad is that. So I decided that I would just grin and bear and maybe it didn't taste as bad as it smelt.

We made it through dinner. T. was in heaven he thought it was the best meal I had made in forever???!!! He said it was the best Indian Food he had had???!!! I ate a bit of it but really did not like it. The shrimp was good but the rest of it I never want to see again! I jumped up to clean up but then I realized that I hated the lingering smell even more than the original cooked ones. T. very kindly cleaned up for me and I lit candles, turned on fans, burnt incense, anything to make it go away.

I hope I haven't offended anyone with this but all of our tastes are different. I love bright, fresh tasting things - pesto, cilantro, garlic. Indian food is not about that. It has heavy, warm, deep smells and tastes. I am the same way about Moroccan food so please God, can he never ask me for Moroccan food???!!!

I guess if you like Indian Food it was great!!!


Posted by Judy@nofearentertaining at 1:19 PM

Is it the smell of onions and garlic that you do not like?

I am asking this because I don't like them either.

There are many rice recipes that you can make without onion and garlic and they smell delicious - in fact they make you feel hungry.

And if the family loves Indian food but you don't want to spend time cooking them - there are some you can churn out in minutes. They will be happy and you will be happy too :)

Ah ha ha ha!!! Wow - you enjoyed the smell of dog poop next to your car over the smells inside your house - THAT is a sure sign that you should NEVER make this type of food ever again. Trust your gut, Judy, and don't make things you don't like...Tell T. he can go out once a month to get his "fix"... :-)
You poor thing. I am soooo smell sensitive, my family teases me about it. I can really relate. When you don't like the smell of something, there's just *nothing* you can do about it. I got queasy just reading about how you got queasy (sympathy queasiness) :-)

I'm not crazy about the smell of curry either. I think it may be something you love or hate.

I've had dinner's like this though, where I just wasn't sure I wanted to eat it or not. Some days it just doesn't work. So, as they say, tomorrow is another day!

Thanks Rangoo but I think I am hanging up my Indian hat for a bit...it was really bad!

Oh Danni so glad that enjoyed my predicament so much! I too have that extra sensitive sniffer and it really doesn't help us out all the time!

Patsyk-I should have just trashed it and gone for Mexican but I was already committed and out of time!

I can understand how you feel Judy.

I hardly spend any time in the kitchen. I need a very strong motivation to cook what I relish and forget about what I hate to eat.

Man Judy! You should have invited me over - I would have helped you out with this mess! ;)

Yes Jenn I should have invited you over!!!

I would have loved eating your Indian dinner! My favorite food in the world is anything Indian.
I also love to cook it, but my family is like you, and they don't even like the way it smells.
And because the prep takes much longer with Indian meals, I don't often cook it.

What you made is one of my more favorite dishes, too. I like it with 'farmers soft' cheese, though. It is more bland and soft, like tofu.

Ok, I'm wiping my chin just thinking about it. hehe