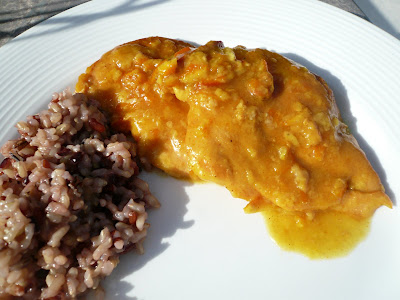 I have been told to never make this again...it doesn't look that bad does it?

Does it really sound that bad? You should have seen T's face when I told him what we were having for dinner. Funny thing is I don't really like curry or Indian food (see this post) but I thought that it sounded pretty good (and would be using up several things in my fridge that I needed out...see the plan here?), and it would be using my Crockpot which I sort of have a love/hate relationship going with!

I was at the girl's school this morning for the first time as a volunteer so that was kind of fun and I had a brief meeting with the "gifted" coordinator to find out how far along we had gotten with my oldest daughter's paperwork. So I needed something quick and that didn't require too much attention from me. This is where the Crockpot comes in to play. I guess the reason that I don't like it all that much is that most of the things that I come across to cook in it have Cream of Mushroom Soup in it????!!! Are the 2 things made by the same company? Is Rival somehow linked to Campbell's? Whatever.

Anyway I came across this when I was looking for something to do with the marmalade and chicken. This recipe, although it is for in your Crockpot, has no cream soup of anything in it so I decided to give it a whirl!

Before the recipe though I want you to check out Stephanie's Blog. Stephanie likes me. I mean really likes me and even blogged about it. Pretty cool huh?

This meal didn't turn out so well and although it was really simple for me to throw in and not worry at all about for the day, T. has made me promise to not ever make it again! I didn't think it was all that bad but then again I got hit with a monster of a cold this afternoon and can no longer smell or taste anything. I guess that's a good thing from what the kids and T. said!!!

What it used up in from my fridge and freezer:

Good work on the using up of ingredients though! I'm going to try to do some of that this weekend...

He, he! I've done this same thing too sometimes... not same recipe, but grab what I have and come out with something different and most of the times the veredict has been: finger down!!!!

Isn't it amazing how our olfacte guides us?

Stephanie sure isn't the only one who really likes you, Judy. ;)

This doesn't look bad at all. With a full jar of marmalade it would probably be a little sweet for my tastes personally, but my husband would like it. I do think that the "reduced sugar" variety that "tasted like crap" is probably where the problem was though! At least you got it out of your fridge.

Thanks for sharing that story. I have a dish my hubby suggested that I don't make again too. I was thinking of a peanuty, curried noodles and tried to work off a peanut butter base with curried powder. While I still think the concept is brilliant, the execution on the other hand leaves much to be desired. LOL let's just say that meal went into the trash.

Hi Kittie-You may be right on the marmalade. They said it was a bit sweet?

Hi Nuria-I mad them eat it anyway. I figured there was nothing in there that would harm them!

Hey Heather-Thanks (blush). I have to buy the reduced sugar crap because they are the only jellies and jams that don't have either artificial sweeteners or high fructose corn syrup. This one was bad though!

Hey fearless-out of my kitchen to never be used again!

Hey bentoist-you're lucky you only have one dish, I have several???

To bad. The concept sounds interesting. I hope you feel better.

Sorry it didn't turn out well.

And I know what you mean about the crock pot. I am only just now discovering other uses for it besides fattening meals that involved canned soup. Like making those Rancho Gordo beans, for instance. Or the jambalaya I recently tried. But yeah, it takes more searching to find decent slow cooker recipes. I wish that wasn't the case.

Very cool shout out you got! Did you really use 8 pieces of chicken? Sucks that it didn't turn out well. Oh, and that is a lot of marmalade, hehe.

The crockpot...I keep buying them and giving them away. They seem so good at the time, and then I realize there's nothing I want to make in them, lol.

I love curry, hate marmalade...so I think I wouldn't really love this dish too much either.

Hey melissa-it turned out so bad that T. took it took work (I made him) and he wouldn't even heat it up for fear of stinking out the office!!

Hey Elle-They were 8 pieces of cutlets so it really wasn't that much chicken if everyone had of liked it!

Hey Jenn-I almost wish I could have tasted this to see how it really was. All I got was texture and that wasn't that bad! I know you like me!