I've got nothing for you...

It's been quite a week. Busy as usual and then some extra family health crisis. I just haven't been feeling to creative this week so have relied a lot on old standbys.

I did make some brownies yesterday but when I was trying to get them out of the pan, I knew there was a reason that Martha wanted me to use parchment but I was too lazy to do it, so they fell on the floor. That happens sometimes.

I did also make some pico de gallo to go with the tacos we had last night. As careful as I am with hot peppers (I always wear a glove. If I get it on my hand my lips will be burning in about 15 minutes. ) I still managed to burn my eye??? I guess I need to leave the glove on until I am done cleaning up the pepper. That happens sometimes.

But here is something a little fun. I am a TV nerd. I watch very little TV. Usually about an hour each evening. On Wednesday nights there is usually nothing on so I have taken to watching Dog the Bounty Hunter...don't fault me. My sister who is even nerdier than I am turned me onto it!

Any way when we were in Orlando a couple of weekends ago for the Foodbuzz dinner we decided to go out after we had eaten. So we were walking along the Disney Boardwalk and who did I see? None other than Bobby Brown of Bobby Brown's Bail Bonds from Denver CO!!! He actually stopped and talked to me for a couple of minutes and let T. take a picture of him and I together. And this is where it got a little fuzzy. I was looking at his text messages on his cell phone. Most of them were from Dog the Bounty Hunter but I have no idea why I was looking at them. I asked what he was doing there and he said that he was working on something. Who knows? Here's the pic. T. is a pretty bad picture taker after about a thousand glasses of wine so this was the best we could do! 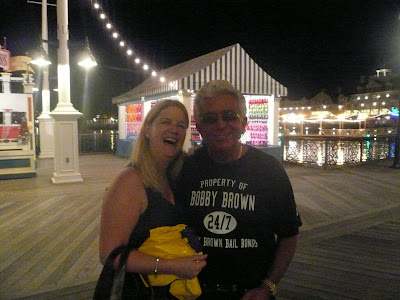 I thought it was pretty funny apparently???!!! 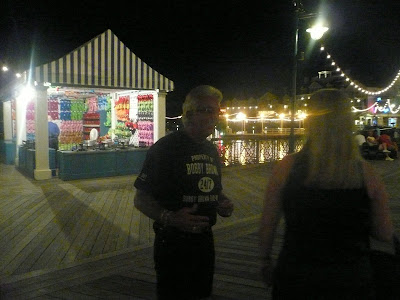 Update on T's Dad: He has a drug resistant staph infection and pneumonia. They are unable to do anything other than try and control it at this point. They cannot do surgery because of the infection and it is affecting his kidneys. This is all related to the surgery he had a couple of weeks ago for colorectal cancer. Keep those prayers and well wishes coming. He needs all he can get!!!

Email ThisBlogThis!Share to TwitterShare to FacebookShare to Pinterest
Labels: not food related

Sending you lots of hugs Judy! For you and T. Even when there is no food involved I love your posts! :)

But, if you need to take a break, feel free - we will still be here!

Oh Jenn-you're the best. The only one who even commented on this crappy post!!! Love you!

It's not a crappy post! I watch dog too, his wife cracks me up with the shoes and nails, not to mention her B**B's!! Best wishes for your father in law!

Thanks so much Marie, you really are incredibly sweet!