A special meal for a bunch of sickies! 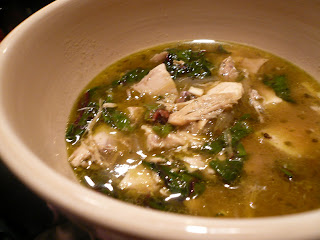 T. was away for the whole weekend but he called me Sunday morning and said he wasn't feeling very well and was going to head home earlier then expected. This was a great surprise for the girls because they didn't expect to see him until Monday morning. But all I really heard was sick...so I leapt (not really) into action and started making chicken soup! The girls and I had roasted a chicken for Friday night and I had saved the bones to make some stock. Good thing too now that T. and my youngest one are both sick now!!!

I knew that the chicken soup would be good for them but I also wanted to make a nice dessert for them too. I had bought some of the most incredible Florida oranges called Cara Cara's ( they have pink flesh, similar to a blood orange but not a dark and their juice is only slightly pink). I decided that I would make them into a cake. I found a recipe for a super easy orange cake. They all loved this one so I will have to make it again!!! T.'s theory on this was that the cake had vitamin C in it so it was the perfect meal to have served. 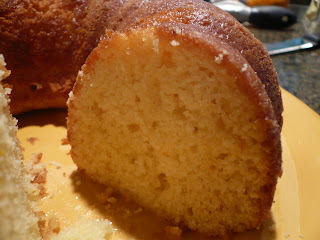 To make the soup:

Stock
chicken bones
1 lg onion
6 cloves of garlic
1 carrot
1 stick of celery
1/4 cup of dried parsley
1 tsp dried thyme
any left over onion or garlic tops (I have been buying from the farmer's market so I have onions with tops on them)
6 cups of water (approx. I put enough in to cover everything completely and then some)

I take all of these ingredients roughly chopped and put them in a large pot and allow it to simmer all day long. When I am ready to make the soup I strain the stock from the other ingredientsa and place it back on the stove. I pick out the meat and some of the greens and chop it and add it to the soup pot.

I add all of this and just let it come back to a boil and allow it to simmer again until the greens have wilted nicely.

I guess I have been making soup on Sunday since I have been going to the Farmer's Market. I have been using it to help get rid of all of the leftover bits of produce that haven't already been used up. I can honestly say that nothing is going to waste in my house right now!!! Tonight's dinner is already planned.

Yes, I know there is no main meat course but I don't think every meal needs one and by eating all of this up tonight I get to go to the Farmer's Market again on Wednesday!!!

I am sick too. Can I come over for some soup and bread? lol