One very messed up day...

Yesterday we had pretty much decided that we were just going to spend the day hanging around the house. We had a bunch of things that had been sorely neglected in the past few weeks - yard work, getting stuff picked up and just general everyday home things that are so easy to overlook and ignore! I got a bunch of cooking and baking done - bread for the girls lunches for the week, soup stock was on the stove bubbly away just waiting until dinner, one really failed batch of goat milk yogurt in my new yogurt maker and another one started, Banana-Chocolate Chip Squares (King Arthur Flour-Whole Grain Baking cookbook). Then it all started to go a little crazy.

The girls were outside playing and they had the Golden Retriever outside running around with them. Now these girls play really rough with this dog and we have warned them over and over that somebody was going to get hurt one of these days. Yesterday was the day! I was about to get into the shower and I could hear what they were doing...a lot of screaming, running, and yelling. The kids and dog both think that this is fairly harmless. But it was starting to sound a little out of control. So there I was with the shower ready nothing on but a tank top as I was about to get in and I thought that I should just tell them to settle it down a bit. Well that's when I saw it happen...my oldest daughter flying down the slide of the play set with the 85 lb Golden Retriever flying through the air and landing on her just as she hit the ground head first!!! For the first little bit I just kept and eye on her, got ice for the headache that she had (yup imagine that!). I went and finished my shower. I came back out to check on her and she was sleeping with a freezing cold ice pack on her head...this is when I started to get a little worried! We are not alarmist when it comes to the kids and we can ignore a ton of things without guilt but heads are another story.

I called T. and got him to come home (he was out at an impromptu meeting). I was able to wake her back up but at this point I wanted her looked at. Her face had started to swell a little too. So when T. got home off we all went to the ER. We got there and it was so disgusting! The whole place smelt like vomit and some people had already been waiting in there since 9 AM...at this point it was about 2:30 PM. We decided to take her outside and see if this was all really necessary (All I could think was that by us being in there we would catch something horrible and end up there again!!!!) We gave her some juice to drink and asked the triage people what we needed to check for. After going through the check list we decided that we really did not want to be there. We got her home and she seemed to perk up quite a bit. It think we made the right decision! She slept fine and she was okay this morning except for some achy body parts (no surprise there). Whew - It took me well over a bottle of wine to make me fine after that!!!!

Any way, the soup was still on the stove so we knew what was for dinner and you have seen enough of my soups to know what they look like and it was really to chaotic here to try and take pictures (also had a friend over for a quick meal with us-yep someone will actually voluntarily come and eat with us!). When she called and I invited her I was just making the biscuits. I had decided to try a new recipe also from the King Arthur Flour Whole Grain Baking Cookbook. 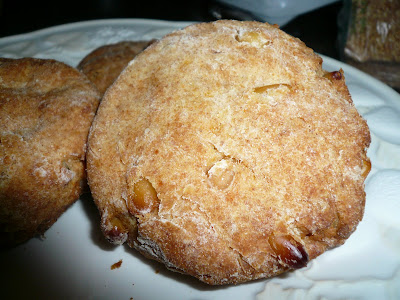 These are made with white whole-wheat flour, which has a milder flavor than its tan cousin. The biscuits would go nicely with smoked turkey or a creamy chowder. Adapted from "King Arthur Flour Whole Grain Baking" (Countryman Press, 2006).

1 tablespoon finely chopped rosemary (optional) (did not use T. doesn't like it)

1 cup (8 ounces) buttermilk, plus more for brushing the biscuit tops

Preheat the oven to 400 degrees. Lightly grease a large baking sheet or line it with parchment paper.

Combine the flours, baking powder, baking soda and salt in a large mixing bowl. Using a fork, two knives, a pastry cutter or a food processor, combine the butter with the dry ingredients until the mixture resembles coarse bread crumbs. Add the cup of Parmesan cheese, pine nuts and rosemary, if desired.

In a small bowl or large measuring cup, whisk together the egg and buttermilk. Add to the flour mixture, blending lightly and quickly with a fork until the mixture is evenly moistened. Turn out the dough onto a lightly floured work surface and, using a bench knife or dough scraper, fold the dough over on itself 3 or 4 times until it comes together. Pat or lightly roll out the dough until it is 3/4 inch thick. Cut the dough into squares or 2-inch rounds and transfer the biscuits to the prepared baking sheet. Stack the scraps on top of each other, fold them as you did for the original dough and pat out and cut again to form the rest of the biscuits. Brush the tops with buttermilk and sprinkle with more cheese, if desired. Bake for 20 to 22 minutes, until the tops are golden brown. Serve warm, or transfer to a wire rack to cool; store in an airtight container for up to 2 days.

All in all it was a good day and thankfully my oldest daughter was not really hurt!

Your girls play "rough-house" eh? The boys in the 'hood better watch it!

As for your biscuits, can't say no to pine nuts can one?

Glad your daughter and the dog are o.k. I know that was scary.
The biscuits sound great. I can't wait to try those.

oh yum! will have to try these biscuits!

Better to be safe than sorry as the old addage goes. Glad that all is well that's for sure :D. These biscuits would have gone well with the soup I had the other day :D

I am sorry to hear about your day - but thankfully everything turned out alright....:)

Those biscuits look AMAZING! I want one right now!!!!

Thanks all for the comments. I was really relieved that she was all right. Head things just scare me!

Try those biscuit they are delicious!