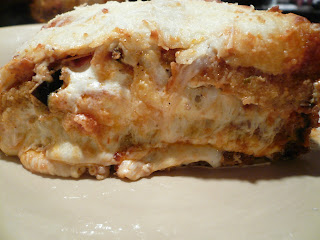 My Slice of Eggplant Parm!
After a couple of very long days of chaos it is so nice to have things back to normal (at least what seems normal to me anyway). Last night for dinner T. decided to cook and he made us his super special Eggplant Parmesan! He only made a half of this recipe because I had only bought one eggplant. 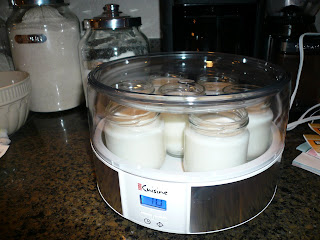 !
I mentioned yesterday that I had just gotten a Euro Cuisine Yogurt Maker Ignore the orange color but see what I mean about the texture!
Last night I decided to give it one last attempt before it was pool bound and it seems to have redeemed itself. I had made all of the other batches using goat milk and I only had enough for a batch of pudding and a cake I want to make today so I used 1% Organic Cow Milk. I don't know if this made the difference but I am going to try to get some more goat milk and try this again. This time I flavored the yogurt with some fresh fruit and sugar. I made this over night so it still wasn't ready for the girls to eat this morning but I bet they will like it for an afternoon snack!!! 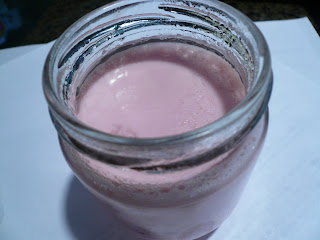 I have also been tagged several times for meme's. Right now I don't have the time but I will get to them when I can. Thanks so much for tagging me! I am struggling with my Daring Baker's Challenge (time wise) for this month and then I need to find time to do the Royal Foodie Joust! I promise I will get to it when I can but for some reason I have lost the whole month of February!!!

Email ThisBlogThis!Share to TwitterShare to FacebookShare to Pinterest
Labels: eggplant, home made yogurt

Yes Peter...it is the best I have ever tasted. Goat cheese, fresh mozzarella, regular mozzarella...how can you go wrong!

This sounds like the best Eggplant ever :D I have bookmarked it for later use Judy :D

Wow - your husband cooks, too? He makes a mean eggplant parmesan! It looks wonderful - too bad I'm the only person in my family that will let eggplant pass her lips. I love it!!
The last picture of the berry yogurt made my mouth water! Good work...so what if the first batches didn't turn out - that was all part of the learning process. Yummy!
BTW, how is it that over 80% of the time, you are *the* first one to comment on a new blog post of mine? It's like you have special powers that sense when I've clicked "publish" or something :-). I laughed out loud this evening when it happened again - within minutes of pressing "publish", judy@nofearentertaining had left me a comment! I love it! And I'd miss you terribly if you stopped! :-)

Holy crap I need to eat that eggplant parmesan. Just, with my bare hands or something. That yogurt looks beautiful, too, Judy. Perfect brekkie with a bit of granola. Nom nom nom.

Valli - It is the best. My husband was taught to cook by his Sicilian Grandmother and makes the most amazing Italian dishes!

Ah Danni - I think it all has to do with the time difference. I check my most favorite blogs in the morning and sometimes with my west coast friends at night before I go to bed!

Heather- I have a nice big slice left over! The kids are loving the yogurt and yes it almost needs the granola to help cut the tartness!

WOW! That eggplant looks so good and so does the yogurt!!! I want both!!!