We went where the road carried us... 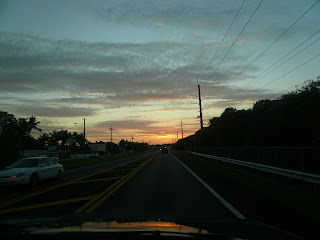 This picture is taken from the car on US 1 just heading into Islamorada and our sunset! 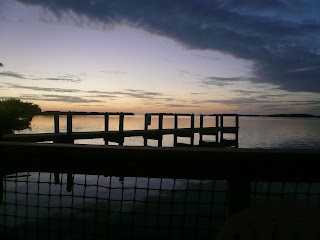 This one is taken from out table at the restaurant!

And we are so grateful that it ended up in Islamorada in the Florida Keys!

What a fun day we had yesterday. T. had to do a bit of work in the morning and my oldest daughter had to finish her school project, so we got a bit of a late start but we had planned on going to the Miami Metro Zoo. This was about 2 hours from home so it really wasn't a major journey but still not something you would do everyday. We really needed a bit of an escape though. After the holiday's we have still been going hard and finally had one day that we didn't have anything that we had comited to.

The Zoo was great. We had never been before and really liked it. It had a bunch of stuff that we didn't even get to so it will be fun to go back to! This is where it all goes a little crazy though. T. and I started talking about dinner and he suggested going to the Keys. We just laughed and then I said "why not?" and then it was set in stone and neither of us vcould think of a good enough reason not to. So off we went. After getting the GPS and OnStar to stop fighting over directions we were on our way. I think it was really only about 45 minutes from where we were at the Zoo to get to Islamorada. Our goal had been to be holding a cocktail and watching the sunset in the Keys! And we did it. We ended up having a really great dinner at the Islamorada Fish Company. The restaurant tables are all outside on the deck and the deck is out over the water. Where we ate we had huge Tarpon swimming right underneath us! What a great experience. We have been very lucky that we are both pretty impulsive and are not afraid to just goes where the wind blows. It has been more challenging in the past when the children where younger but now that they are older we can get back to it!

We finished out dinner grabbed a couple of Starbuck's coffees to keep us going and we were on the road again! This time heading home.

It was a nice quick drive to Alligator Alley and then it started to get a bit weird...the moon literally disappeared. If any one can explain this it would really make my day! I tried to get pictures but nothing was showing up on the camera and you don't just pull over on the Alley (or do you?...I'll get to that later!). When we turned onto the highway the moon was in front of us just to the left. It wasn't really high up but high enough to shed some light. It is is the first quarter lunar phase right now and looked like a smile in the dark sky. As we kept watching it though it was getting lower and lower (it is about 9 pm) and oranger and oranger and smaller and smaller. Until suddenly it was really red, huge and low. Then all you could see was two little tips on either side where the top of the smile had been. I pulled out my iPhone and started searching lunar eclipses and anything lunar but nothing showed up so my question is WHAT DID WE SEE???!!! Pretty bizarre. It didn't come back either. When I went to bed a 1 am I went out and tried to find it but it was no where to be found.

Anyway on with our journey...shortly after the moon fell out of the sky the big honkin' truck started chugging. My husband had let us all run out of gas at 10:15 at night on Alligator Alley!!!! The toll booth's were so close we could see them but not another inch was to be gotten from the beast! Thanks goodness for OnStar. They had gas to us within a half hour but in the meantime T. had gone out (yes along I-75 in pitch black darkness) to press the button on the call box that we had stopped by. He stepped on a snake and it startled him and he pushed the button that you need to pushed to get help and quickly got back in the truck. Well help came in the form of a speeding Sheriff's car asking us what the emergency was. I guess the buttons might be mixed up or T. hit the wrong one but anyway they had been alerted of a roadside emergency and were quick enough to stop the fire and ambulance that was headed our way. They were not impressed and not very helpful! They actually left us there with our lonely set of emergency lights blinking on the side of the road!

Anyway we got the gas, got home and got the girls to bed. We realized that this spontaneity was a huge part of us and that we were so glad to have it back!!!

Thanks Islamorada...couldn't have done it without you!!!

Email ThisBlogThis!Share to TwitterShare to FacebookShare to Pinterest
Labels: not food related

OMG! What an interesting journal of your trip! I'm not sure about the moon, but it's been known to be "moody"!
I would never step foot out onto Alligator Alley! I've seen what lurks in those ditches.
Thanks for sharing! And great blog!

It was pretty wacky. Ms. Coke is the only other person that I know that saw this!