First Step Towards Simplifying My Life! 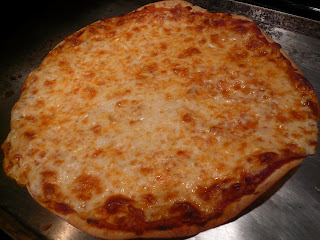 Last night was the first small step towards reaching my goal of simplifying my life in 2008. Always before Tuesdays were incredibly hectic in the Chiappini house. But now my oldest daughter has gotten her green belt in Karate (congrats my love!) we are now able to switch some of the nights that she needs to go. Then on Tues both of the girls will be able to go ice skating and I won't be expected to be in both places and try and get dinner together. This way I can organize dinner and have T. throw it on so that it can be ready for us when we get home. Pretty slick huh?

Last night I decided that I was just going to have a big old salad but they were going to have pizza. I didn't really think that I needed to make pizza dough for just the 2 of them so I figured that we could use tortilla shells topped with sauce, or olive oil, and cheese and bake them until they were nice and crispy. Sounds like it should have worked well huh? I guess with all of the stuff on the pizza's they were a little gummy when the cheese was nice and brown so we had to cook them a little extra. I would definitely do this again. It is great when you are tight for time and need a fast and filling meal!

This could also be used during a sleep over or any other type of kid party! You can let the girls build their own "tortilla pizza". How cool would that be?

I love making tortilla pizzas - the less you put on them, the better they stand up and actually are crunchy. The kids I taught at cooking camp this summer loved making them!

Congrats to your daughter!

I love tortilla pizzas! I used to make one for myself everyday after school when I was younger. :)

Cooking Accomplished! has been a great find for myself and several of my friends. The concept is simple; you go online, pick the entrees you want and the date you want to assemble them. The difference between Cooking Accomplished! and several other businesses like this in Portland, is quality! The owner is a trained chef. They have a commercial kitchen where all the ingredients are prepped by Shelley and her staff. Many of my friends, prior to joining me for meal assembly sessions at Cooking Accomplished!, admitted to serving and eating frozen or pre-cooked meals several times a week and to dining out two or three times a week. We decided since we are worried about nutritional value and using quality local ingredients we would research meal assembly as a solution to reducing time spent shopping and preparing dinners with the goal of eating healthier. The only assemble-your-own meal company that we found in Portland, that had great selections, high quality local ingredients and prepped all their food in-house is CookingAccomplished! in Lake Oswego. Since I started preparing meals at CookingAccomplished! I've also signed up for a couple of great cooking classes. My son attended a kids class as well and he can't wait until the next one. Shelley has done a fantastic job of creating a quality experience!