Some of the best meals are made when cleaning out the fridge! 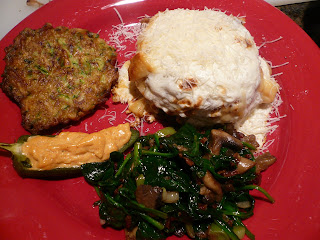 I am looking for chickens...actually not really chickens I want their eggs! We have been trying to eat seasonally and locally but boy is it hard sometimes. I have been looking for farm fresh chicken eggs. shouldn't be too hard right? Wrong. I drove 3 hours today on the hunt for chickens eggs and still came up empty. The only place that I can find around here won't return my calls or emails so I have to keep hunting. Hopefully by the end of the week I will be able to show you some great things I have made with my farm fresh eggs!

Anyway the other night after we had been to our local U-Pick I wanted to just clear out the fridge and make sure that we used up everything that we could before we put the new stuff in. We ended up with a wonderful meal utilizing left over items and some really great fresh, local produce!

We had some eggplant left over form my Royal Foodie Joust entry so we used that and made it into 2 individual stack like eggplant sandwiches with fresh mozzarella cheese, tomato sauce and tomato slices in between. T. topped his with some left over Manchego cheese and Parmesan! Then we baked them to get everything nice and warm and the cheese melted and browned. 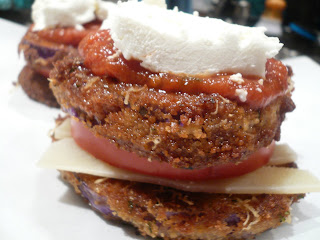 Then onto the spinach. We had some baby spinach leaves and wanted to cook them up. We used some Panchetta that I had left over from the Royal Foodie Joust so I cooked that up nice and crispy and cooked up some mushrooms that were on their last days as well. All went great with the spinach as you can see! 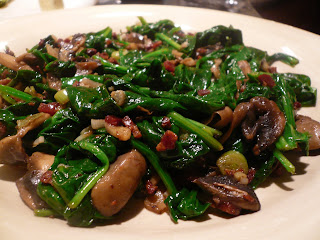 To cook the spinach I first browned up the panchetta (regular bacon would work as well but you might need to drain it before you add the other stuff) add a bit of olive oil (1 Tbsp) some sliced mushrooms and some chopped up garlic (we use a lot of garlic). Cook until all of this is soft. Add the fresh spinach. It will be completely fill you pan but just stir it around and it wilts right down. Cook until just wilted and stir in 1 Tbsp of butter. Remove from heat and serve! This can be done without the bacon or panchetta as well.

Next we move onto the zucchini fritters. I have posted that recipe before but here it is again. This is such a nice easy side dish to make when zucchini are plentiful. Zucchini Fritter Recipe. T. decide that he wanted some aioli sauce (garlic/mayonnaise sauce) with his so he made some up and put it in these fresh roasted jalapeños that we had as well! 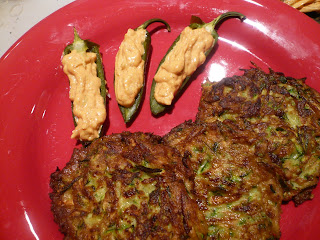 This turned out to be one of the best meals that I have had in a long time! The kids liked it and ate bits and pieces here and there. Sure beats eating left overs again!

Wow! that is a great looking meal. How did you cook the spinach? and how long? I grow spinach in my raised beds and that looks like a good recipe. I am saving the zucchini recipe too. Thanks for the new ideas.

Ah GA farmgirl...I did forget to put in how I cooked the spinach! It is in there now. I am so glad you are enjoying the recipes. I am going to try your biscuits on one of my less busy days this week!

Hi again Judy, thanks for the recipe.Can't wait to try it. Now, you are tagged. The rules are on my site. Have fun with it and have a great day too! P.S. The biscuits really don't take long at all. I can make out biscuits about as fast as whopping a can of them on the counter. But I've had about 32 years of practice.