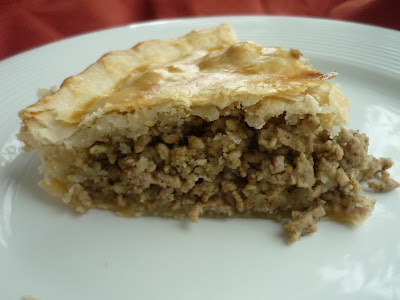 The other day T. and I were running errands and talking about food and things that I haven’t made in a while. He mentioned Pork Pie. This has to be one of our favorite meals. Funny though, it’s been well over a year since i have made it. Don’t you hate when that happens???

This is one of those incredibly fast and simple meals that really comes together in no time at all.

I usually make my own pie crust but this time I was kind of tired so I used store bought. Should have made my own…it was just a little too sweet to go with the savory pie. Lesson learned! 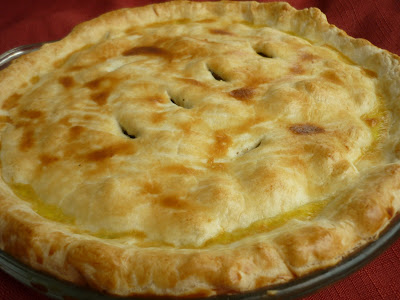 Tourtiere (This recipe is from - Janet is Hungry)

1. Prepare pastry: Cut cold shortening into cubes. Place butter/shortening in food processor with flour and salt. Pulse a few times.
2. Dump flour mixture out into a bowl and start adding water a tbsp at a time until mixture forms a dough that will hold together. Wrap with plastic wrap and refrigerate for about 30 minutes.
3. Make filling: In a non-stick skillet with a cover, cook pork, breaking up the larger chunks.
4. Add onion, celery, garlic and cook until the onions are tender.
5. Add salt, savory, pepper, allspice, bay leaf and water. Cover and simmer for 15 minutes. Remove lid and simmer 5 more minutes until most of the water is gone (it should still be quite moist).
6. Add mashed potato and remove bay leaf.
7. Roll out pastry (TIP: I roll my pastry out between two sheets of plastic wrap, when it is the right size, peel one sheet away and use the other to pick up the pastry and flip it over into the pie plate). Fill with meat mixture, cover with second half of pastry and seal edges. Cut a few vents in the top.
8. Brush top with a mixture of egg yolk and milk.
9. Bake at 425F for 30-40 minutes until golden brown. 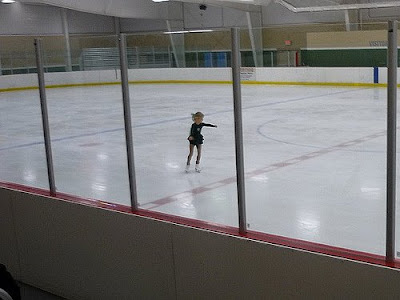 Youngest daughter was in a skating recital over the weekend. She absolutely nailed it...clever little girl!

Your little skating princess is adorable! And yummm on the pork pie!

Oh does that ever look good. I'd love to try that!

Oh wow does this look good! I am saving this one for the "must make" list!

And your lil one is adorable! So talented!

That pie looks delicious! Kind of like a French-Canadian version of Shepherd's Pie. Well done!

I do hate it when that happens! Come to think of it, I have a couple winter dishes that I haven't made since last year...

That looks mad good though, I love meat pies.

Looks good! I have been wanting to try tourtiere.

With so much new food and experiments in the kitchen I many times don't make the same meal twice in over a year (only our favorites are repeated over and over) so you are not the only one that doesn't cook a favorite in over a year :-p But isn't it exciting to always eat something new? I love the looks of this pork pie, but I love pork so that helps :D

Mmmmmm what a fantastic pie! Would love to try it some day :D.

YOur little girl looks so profesional already... how cute :D

I love pork and I love pie...so why NOT put them together - great idea!

Your daughter is adorable! My mom used to make pork pie very year around the holidays. I miss it! Will give this one a try, soon--it looks delicious!

My Dad was French Canadian and his family taught my Mom how to make this pie. We usually had it just for special celebrations. My Mom used lard in her pie crust and a small dash of cinnamon in her seasonings. I haven't made it myself for years......think it is time I tried again!

love savory pastry dishes like this :) definitely with you on need to make own pastry

Great minds think alike Judy. I made a version of tourtiere on the weekend from the Great Canadian Food Show.

We've got the pork pie on the to do list. Along with making pie crusts!

This is one of Quebec's most loved dishes, enjoy it alot and despite it not having any gravy or sauce...it's still damn moist and delish. Merci et bravo Mlle. Judy!

Hooray for your little girl!

And the pork pie looks great too. :)

Sounds like a great week night recipe. I do hate when I forget to make our favs! Your daughter is darling!