So I spatchcocked a chicken... 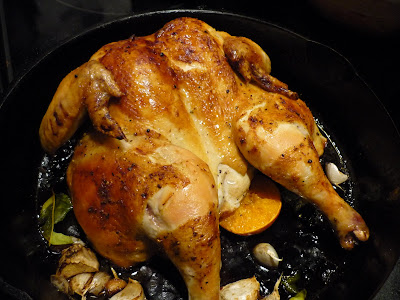 And I have to tell you it is my new favorite way to prep chicken for cooking!!! The chicken is given a chance to cook more evenly and much faster than if you were to leave it whole.

Spatchcocking is simply the process of cutting out the backbone and the sternum and pressing your chicken flat. It has always intrigued me but I was a little intimidated to do it myself. When I was over at Jaden's house (Steamy Kitchen) the last dish that we started on was a spatchcocked chicken (seasoned with curry) that was browned up stove top in a cast iron skillet and then placed in the oven to finish cooking. She had added a split head of garlic and several halved clementines. She used the clementines and garlic to slightly raise the chicken from the bottom and then let it cook away in the oven. I had to leave but before the chicken was done but I couldn't stop thinking about it...

So here's what I did:

Took a small chicken and spatchcocked it, quite nicely too, and flattened it out. I seasoned it with some mixed seasoning, slat and pepper. Heated up my cast iron skillet (layer of oil on the bottom) on the stove top. Preheated the oven to 350 degrees.

Browned the chicken skin side up first then flipped it over. Squeezed a couple of clementines over the chicken and added them to the pot and stuffed them underneath the chicken along with some garlic and slices of ginger. I also threw in 2 Kafir lime leaves (Jaden had give me from her tree).

After about 35 minutes my chicken was done...I swear! This is the fastest and simplest way to cook chicken yet!!!

Now that is impressive!

Looks delicious Judy - we both have chicken on the brain today! LOL!

Judy, spatchcocking a chicken is a great way to fast grill a chicken and marinades work real well with this method.

I've seen that method before in Cooks Illustrated. I've never tried it myself, but it looks wicked good!

I've only done this once before, but you've inspired me to try it again, Judy. i love the idea of putting clementines underneath! It looks fabulous!

I never knew that method was called Spatchcocking, it's such a funny word! Your chicken does look marvelous!!!

I've never heard the term "spatchcocking" before. I did this previously with Cornish game hens, but the recipe just called it "butterflied"-- not quite as exotic sounding as "spatchcocking".

It made for a very impressive meal, to serve an entire "spatchcocked" game hen on a plate with sides, and then placed it in front of my then "new boyfriend". He was very impressed with my cooking abilities!

Since then I have learned that he never had home-cooked meals growing up (grew up eating frozen TV dinners with his Dad and grandmother), so ANY meal that is cooked at home is impressive and appreciated by him!

I am a big fan of spatchcocking especially when grilling a whole bird.

Stove top, I like to crisp-up the skin before putting in the oven.

The first time I ever prepared a chicken that way I almost threw up.

I agree now though, it is a most wonderful way to cook a chicken!

This looks very fun. I will have to have the DH mutilate the chicken, though. I don't like touching chicken. Yeah, it's a weird phobia. But he used to work at a restaurant when he was a teenager, and one of his jobs was cutting up chickens! So it doesn't faze him. Thank goodness.

I had a very nice comment all printed out and Blogger ate it. I hope it didn't taste as good as that gorgeous chicken looks. Have always wanted to do that spatchcocking thing. So Cool!

Hey Peter-I have always heard of it for the grill but when I saw Jaden do it this way I had to try it!

Hey Elle-The clementines made it so good!!!

Hi Michele-It is a funny word isn't it?

Hey MrOrph-I did crisp it on stove top. Need to try it on the grill!

Hey toontz-It is wierd cutting through the bones...

Hey Kelly-Pesky Blogger. If I can spatchcock you can certainly spatchcock!!!

I love this way of cooking a chicken too Judy, especially on the barbecue. It is ready on the table in record time!!

I have never tried this, but you made it sound easy, and the thought of crispy skin and then juicy marinade has all but got me sold!

Well, now, *I* can't stop thinking of *your* chicken! I love the flavour combinations you have: clementines, garlic. . .bring it on!

I've never spatchcocked a chicken, but it looks well worth it!

'spatchcocked' is as wonderful sounding as your chicken looked! Wow!

Oh I've always wanted to try that! Glad you did your first one and shared with us (with another thanks to Jaden!). It looks beautiful Judy.

AND you're so lucky she gave you those Kafir lime leaves. Awesome.

Looks gorg! I've always wanted to try that method but I was a bit nervous. Perhaps I'm just being a fraidy cat for no reason...

We will do this one asap...we are in love with our iron skillet! best, s

Did you put a lid on the chicken while baking? I will make this dish very soon. Thanks, Melissa