My savory potato salad screw up! 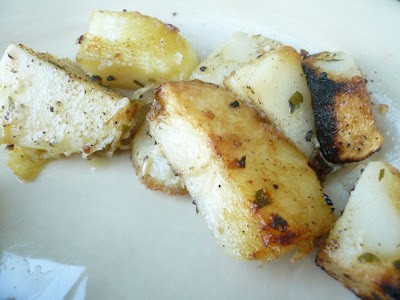 The other night when I was making the stuffed grape leaves I saw that I had a bunch of potatoes that were sprouting eyes. I figured that I had better get hem used up. I also new that I had some beans so I originally had been looking for some inspiration in the way of a potato and bean salad. But when I decided on a nice easy light vinaigrette and got my beans out I realized this was not to be!! Those beans stunk...Enorma got those!

I finally decided on Potato salad with a vinaigrette dressing. Would have been really good to but I undercooked the potatoes???!!! Too many things going on at once. It wouldn't have been so bad but I didn't even notice it until I tasted it after I had it all dressed and ready to go in the fridge!!! I figured I could microwave it and then chill it again but that still sounded like a lot of work. I was grilling the goat cheese stuffed chicken anyway so I decided to add a bit more oil to the potatoes and put them in an aluminum foil packet and finish cooking them on the grill.

They actually turned out incredible and I would not hesitate to do this again. The nest time I might just microwave them and then do the dressing and then grill them. I have other ways that I grill my potatoes but this turned out very well with the vinegar adding something else to it! Here is how the recipe will go:

Directions:
These would be great served as a side dish to just about anything. I was thinking that you could even add cherry tomatoes to cook with it on the grill. This could be a very versatile dish with a bit of creativity!

Oh yum yum yum. And here's my dilemma...almost every day you post some recipe that makes my mouth water. And almost every day, I copy the recipe into an email and save it in my 'drafts' folder so I can access it later and make it. My dilemma is, my drafts folder is FULL with these delicious-yet-still-unmade recipes and I'm always so busy outside that I'm NEVER getting the time to make them. Chickens and donkeys and garden are sucking up ALL my time. Whine, whine, sob!
So, here's my thought: You need come to my house and make me some of these yummy recipes. That would solve all my problems. What? What's in it for you? Um....well...how about direct access to my sparkling wit and clever conversation in addition to my undying gratitude?
Not interesting enough, eh? sigh.

How fun that I can post really L-O-N-G comments for you again. :-)

Here!Here! Good save Judy...they look good, the hint of acid is nice too!

Great save Judy....anything with the word potato in it and you've got me there:D

They look good to me:) Yum!

Sometimes the best recipes turn out from potential disasters!! Well done on the save Judy!

Dharm is so right - this is exactly how tarte tatin was discovered!

Oh, and the Melanie Dunea book? Get it, it is really good. My girlfriend works for a photography magazine and interviewed her last year. It is a wonderful read and a great coffee table book

Oh Danni-I am so glad you can comment again!!! And although the offer is tempting I just can't do it. Maybe you want to tear yourself away from your deer chasing donkeys and come here???

Hi Val-I have noticed your passion for potatoes!

Hi Dharm-they did turn out great despite my mess up!