Did I ever screw that one up!!! 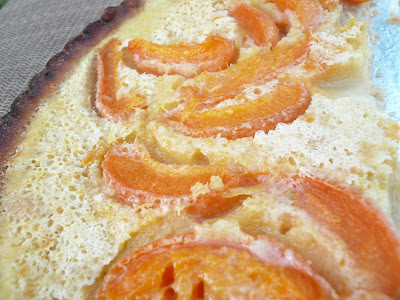 Thick skinned, sugar topped, burnt crusted apricot tart. Yum???
So I had a bunch of apricots sitting on my counter starting to wither up a bit. When I say a bunch I mean that I cought a whole thing of them at Costco. I really thought everyone liked them. Seems they do they just won't eat them???!!!

I decided to use some of them in a tart. Remember the tart that I made a couple of weeks ago, numerous times? This time I decided to use the apricots in it. This was going to be my entry into this months Royal Foodie Joust but I just screwed it up too badly so back to the drawing board on that one!!! I had several other ideas so this is okay!

On to the tart:

I played around with the ingredients. I added some whole wheat flour to the crust and that part was good. I made the filling and had it all poured into the crust and arranged the apricots in the tart. It looked so pretty!!!

I started cleaning up and I was washing some stuff. I grabbed a bowl that had some stuff still in it. OMG - I FORGOT THE FREAKING SUGAR???!!! Where the hell is y head???? Could it be on the pizza dough I was making for dinner, or the bread that I was baking for lunch tomorrow, or possibly on the stuff I was chopping up to put on the pizza???? Maybe I do try to do too much at once???

My solution: Pop that sucker out of the oven (5 minutes in), bump the filling out, stir in the sugar, put it back in the oven and hope it turns out. No hope in that!!! 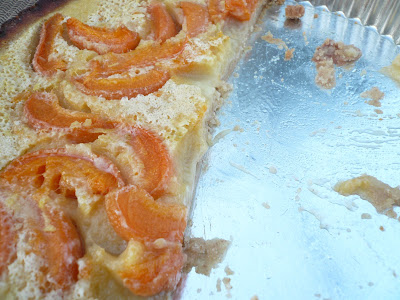 See everyone ate it anyway!!!

It looked terrible. Funny thing is though it tasted great. I had added ginger in with the apricots and all the flavors blended nicely. The lemon, ginger, apricots.

Now onto the apricots. How can they feel so soft when they are raw but if you are too lazy to peel them and cook them in a tart they feel as thick and nasty as peach skins??? Could I have done anything worse to this tart? Oh yah burning the crust!!! 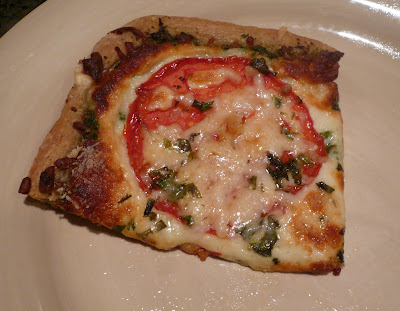 For dinner we had pizza. I've posted this before so see here. I love mine simple with just some olive oil, mozzarella (fresh and shredded) and fresh tomatoes. T. has his with anything he can find or that I have cut up, the youngest one had tomato sauce, cheese and pepperoni and the oldest has just cheese. Everyone was happy!

I will try this tart again but not for the joust that will be a different thing!

Oh, I have had the same kind of mishaps in the kitchen. Usually when I am trying to do too many things at once like you. The tart sounds like it was still delicious, and that is what counts.

One Thanksgiving, my sister brought the pumpkin pies (first time, my mom usually makes the pies) We sat down to eat them, and looking around, I see my husband make a funny face (but he did not say anything). I took a bite and said to her "Bean, I think you forgot the sugar", and she burst into tears! I felt so bad for her, but all the women gathered around, patted her on the back, and went to work. We scooped out the cooked pumpkin, mixed it with sugar and Cool Whip and stuck it in the freezer for awhile. MMMmmm...pumpkin mousse pie!

Judy, I love the tart! I had been waiting to try it out on my extended family this past weekend since you first posted it. Everyone loved it (with blueberries) and so it will be on the dessert table for our big cocktail party this weekend, along with your key lime pie! Thanks for the great ideas! Perhaps I'll make the Lemoncello cocktail our feature drink!? That would require me to do some 'testing' of it this evening. Can't wait!

Oh no, I am so sorry your tart got funked up! But all that counts is that it tastes good! Which is apparent that it did! :)
You sound like me in the kitchen - doing 10 things at once! Nice looking pizza though! YUM

The tart still tasted good, that is what matter. Now, that pizza!.... looks delicious.

Hi Toontz - Glad to hear that other people have issues like this!!! Good save on the pumpkin pies!

Hi lmcc-I am so glad that you liked it! Get testing the limoncello but be careful it packs a punch!

Hi Jenn - I guess we all cook like that don't we? Add 2 crazy and wild kids to the mix and it's no wonder I mess up a lot!

Judy, you're a good sport for posting your less spectacular moments. I say the kitchen Gods will reward you with a Joust entry that will kick some serious a$$!

Bah, dessert is always good, don't beat yourself up! If it's ugly, just put ice cream on it. :D

We've all done things like that at one time or another, no big deal! It got eaten up anyway, it must have been good!

At least everybody ate it and enjoyed it!

You are so funny Judy! I think we all have had our fair share of kitchen mishaps! As long as it tasted good, that's all that really matters. Your pizza looks just great too!

I've done things like that plenty of times! From here, the tart doesn't really look bad. As long as it tasted good, all is well.

Now, that pizza looks amazing! Just the way I like it!

So sad..this would have been a great entry for the Joust Judy:D

I look forward to making your pizza and I know that we will enjoy eating it. It is so nice that you provide pictures of the end results.

This is my first official comment and I am so glad to see that not all of your creations look beautiful. Of course, these are the ones that taste the best!