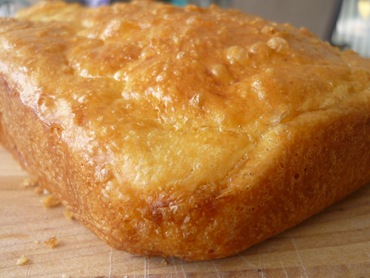 I tossed around whether or not I should post a fail of an excellent recipe that so many others have had huge success with and in the end I obviously decided to post it. Why? To maybe help teach someone else what not to do and prevent an fail for them! I will also point you in the direction of some really nice ones that did not fail at all… 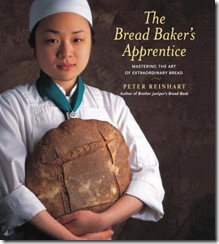 I was excited about making the Brioche. It looks like such a wonderful loaf of bread and I’ve had such wonderful luck with all of the recipes up until now that it didn’t even cross my mind that something would go wrong with this. I did not have any brioche molds but thanks to the Google group and PR’s great directions I knew that I would be able to form them and make them in loaf pans.

My sponge performed perfectly and I was ready to make the brioche. Using my mixer I was able to mix the eggs with the sponge and add the flour and other ingredients. It was when I got to the butter I had some trouble…

My butter had not quite come to room temperature and was hard to mix in. Even after about 12 minutes of mixing and scraping I never really got that silky, smooth soft dough that people were talking about. I decided to stop it there and let it rest overnight in the fridge and would deal with it in the morning. I shaped it into the rectangle that was called for and placed it in the fridge.

In the morning I got started right away and prepared my pans. I was only going to bake 2 of the loaves right them and had planned on making rolls out of the remaining dough.

Shaping was tough. You had to work fast as shaping this dough was like shaping a blob of butter and it was melting fast. I formed it and set it out to proof for 1-1/2 to 2 hours. This is when I knew I was really in trouble. PR had said that larger shapes may take longer but after 3+ hours I was still not happy with the rise! Should I have let it go longer? I’m not sure. I plopped them in the oven and hoped for the best.

By now you know they didn’t turn out and I have one good theory as to why. My butter was too cold and my bread dough must not have ever reached the internal temp that it needed to get to during the first rise. :(

I was going to try and make this again. Now that I know what I did wrong but seeing as I have a different loaf of bread to make each week I am going to skip a remake of this and revisit it at the end! 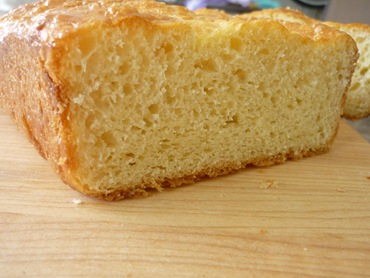 The girl’s loved this bread and ate it toasted and for sandwiches for lunch. None of it was wasted but the unbaked dough that was in my fridge…

Check out the Bread Baker’s Apprentice Blogroll to see some really nice Brioches! Ones that did not fail!!!

Posted by Judy@nofearentertaining at 3:30 PM

The most important words in the entire blog are the ones in the caption:

"The girls loved this bread and ate it toasted and for sandwiches for lunch. None of it was wasted but the unbaked dough that was in my fridge…"

Personally, since they liked it, I would have baked the rest of the dough. So what if it wasn't exactly a perfect brioche. If it tasted good, it was a success.

Love your spirit Judy. I think Dragon's Kitchen had 'brioche' issues as well. The crumb does look good in the pic though. My kids would have been just like yours...good for them!!

I don't think it's a complete fail if the flavor was good. At least you know what went wrong and can correct it next time you make this bread.

My brioche was also a failure, but I have no idea what went wrong. I have to get the post up about it...

At this point, personally, I'm not impressed with brioche. We're not friends. :/

Your brioche looks just like mine! I think I just didn't let mine rise long enough, but it was 2am and I wanted to get it done.

I thought it tasted pretty good, but it's definitely not the kind of bread I would ever make regularly. I'm thinking of doing the middle class or poor man's later this week, just for the sake of comparison, though.

I swear I'm not kidding when I say that it barely looks like a "flop"! the picture is great! ok so maybe it's not traditional but looks pretty appetizing to me!

Thanks for sharing your mistakes with us. That truly emulates the spirit of the BBA Challenge group, willing to screw up so that the rest of us can learn!!

My sister teaches kindergarten and on the first day of every year she tells the class, "Mistakes are how we learn!!"

It might not be the most beautiful loaf of bread, but if your family loved it, then you didn't fail :) That is my philosophy :-p

Well at least your family liked it - that sounds like a win to me!!
I think it looks nice with all those nooks and crannies!!

I let mine rise FOUR hours and I think it could have gone a few hours more. Must be some fridges are colder than others.
Taste is the most important. :)
Super baking along with you,
Susie

Taste is most important! And your girls loved it...sounds good to me!! Sometimes when my bread fails I just put peanut butter and jelly on it and call it a success! happy baking...Casatiello awaits!

Looking at the grain it looks fine to me. I think it was the shaping. But this was great post showing that bloggers have some less than perfect mmomnets. By the fact that the girls gobbled it up shows that it was good.

Thanks for sharing... I haven't had a major failure yet but I'm sure it will happen sooner or later. It's nice to know that others don't always have perfect results. And at least it still tasted good! :)

If at first you don't succeed...

I made "ciabatta" for the first time last week and while it tastes fabulous, it is not ciabatta. I've got to figure out where I went wrong...

This is really a well laid out website. I like how you have presented your information in excellent detail. You seem to really love your site. Keep up the great work here and please visit by my blog sometime. The url is http://healthy-nutrition-facts.blogspot.com

AWW, I'm sorry to hear about your Brioche fail! How cold do you think the butter was? Mine was definitely not yet at room temperature when I used it, but it wasn't that cold anymore either. Did you use cold eggs or did you let them warm up? My proofing took forever, too, and definitely did not rise as much as I would have liked . . . hope it works next time!

Thanks for sharing your experience with it! It doesn't look like a failure, but hopefully you'll be happier with your next one.

Hey, if your family ate it up then it doesn't sound like a fail to me!

Mistakes are the best way to learn! I had pretty good success with my Brioche but if you want to feel better you might read about my bagel fiasco: http://strangerkiss.wordpress.com/2009/06/20/the-great-bagel-disaster-of-09/

The fact that your family enjoyed it makes all the difference.